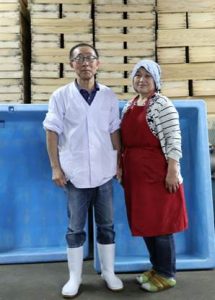 The Yokote Basin is one of the most eminent areas for rice crops in the Akita prefecture,
and used to be as well-known “fermentation zone”. The area once contained the greatest number of Koji producers in all of Japan. However, a thriving industry that comprised over 1,300 Miso breweries during its golden age has now decreased to less than 20 breweries. “Niiyama Food Processing Co., Ltd.” has developed, during its evolution,  popular products like raw koji,, Amazake “Amekoji” (registered as a  trademark in the prefecture), Niiyama Miso, “Shio Koji” etc., some of which are still in the pipeline. 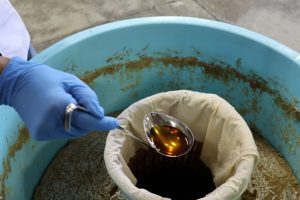 “Tane-Koji” (a seed koji), “Akitakomachi” and “Sasanishiki” are rices for consumption,   made in Akita, that are also utilized for producing Koji rice by “Niiyama”. For making  Miso, sun-dried salt of Oga and “Ryuho” soy beans, produced in Akita, are used as raw
materials. According to the president, Mr. Niiyama, “Hiraka Miso” is brewed with a 10:20 ratio of soy beans to Koji rice, in contrast to the 10:5 ratio used by “Shinshuu Miso”, Japan’s market leader. We use four times more Koji than “Shinshuu Miso”, in our recipe; so you can discover for yourself the flavor of Koji enhancing the tender sweetness
of our Hiraka Miso.
“Niiyama” can produce Miso at the customers’ request. It is also possible for “Niiyama” to brew an original Miso recipe adapting to the customer’s specifications on the choice of ingredients and the brewing process, or to recreate a repeat recipe.

It is said that “Misotamari” from the mash in the Miso brewing process could have been the origin of soy sauce. President Niiyama has managed to extract “Tamari” and merchandize it. This attractive, amber-colored product is named “Misotamari”; it is,  full of amino-acids with deep flavors. It is suitable for making soup stock, eating rice with yams or raw eggs (Tamago-kake gohan: TKG), as a substitute for soy sauce. 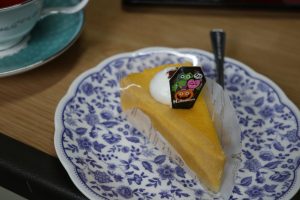 Next to Niiyama’s factory, his daughter works at the confectionery retailer “Marble” as a pastry chef, making cakes that have a tender sweetness, and a slight Koji flavor to complement the sweet taste. Try these cakes that represent a blend of Japanese tradition and Western confectionery!